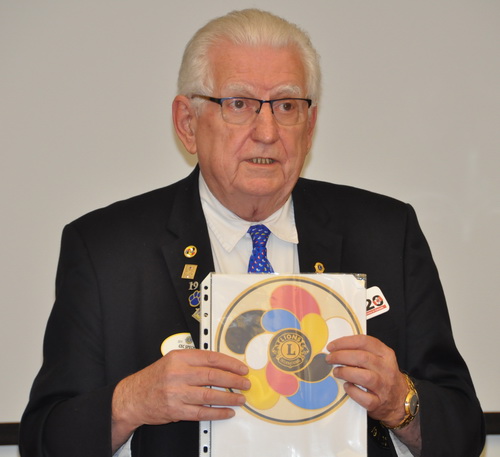 District Governor Cec Specht's annual visit to our club took place on 25 November. Among the topics he spoke about were the Lions Clubs International Foundation and the Lions DogGuide program. More photos HERE

Lion of the Year 2019
Carol Martin 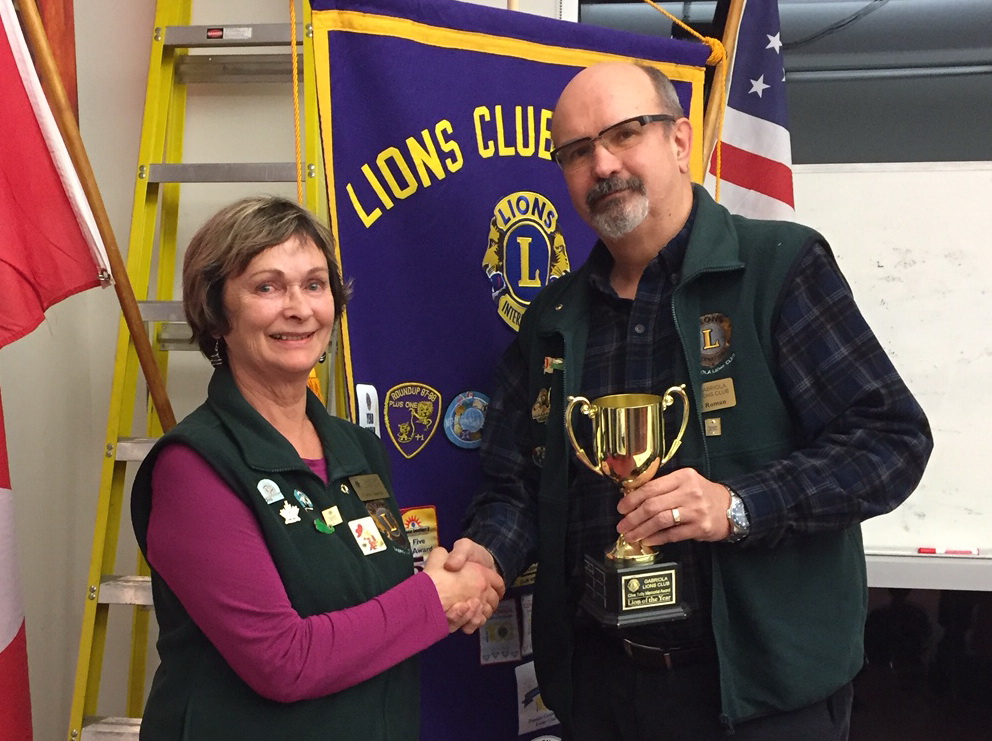 Heartiest congratulations to Lion Carol Martin for having been chosen by her fellow Lions as Lion of the Year. Carol has done a stellar job as club Secretary, a pivotal and most challenging job in the club. Shown is Lion John Roman presenting the trophy to Carol. Well done Carol! 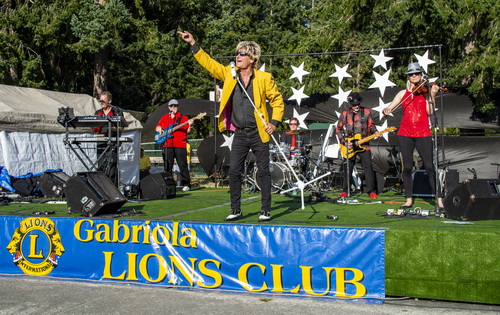 The 23 Annual Concert-on-the-Green was another great success. Held on Thursday, August 8, our opening act was The Vinyl Cafe's Reid Jamieson Band, featuring Reid Jamieson and Carolyn Victoria Mill; the feature presentation was a ROD STEWART tribute by Rod and the Mods, featuruing Brent Stewart. More than 1,100 people attended and over $31,000 raised for our charitable programs on Gabriola!

Congratulations to R.J. Bastedo of Waterdown, ON, winner of our raffle for two Air Canada tickets to any destination they serve in Canada!

Photos of past concerts are HERE. 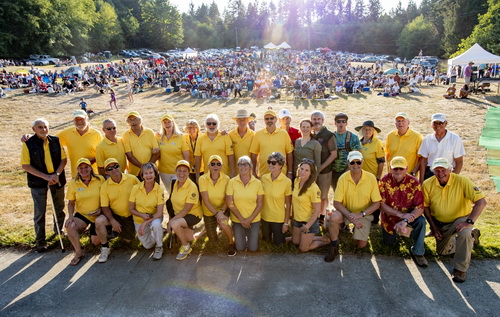 Lions smiling at the success of this year's Concert-on-the-Green. More concert photos HERE. 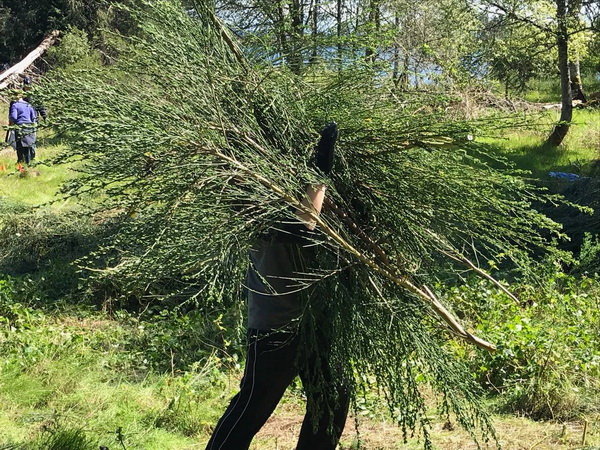 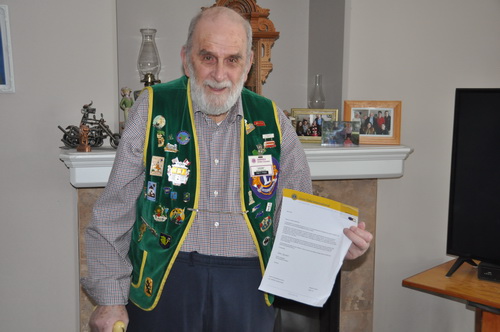 Heartiest congratulations to Lion John Barton on receiving an insignia representing his 35-years of service as a Gabriola Lion from Lions Clubs International, an inspiration to us all. 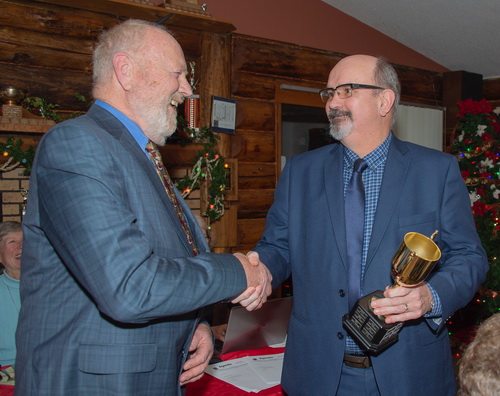 Heartiest congratulations Lion John Roman on being voted 2018 Lion of the Year by his fellow Lions. John's tireless work as Chair of the Concert on the Green Committee has lead to its tremendous success. President Doug Cavill presents the trophy. 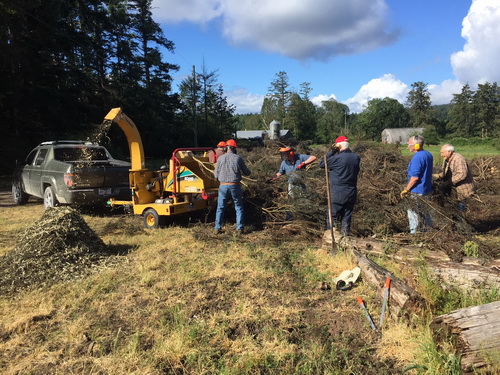 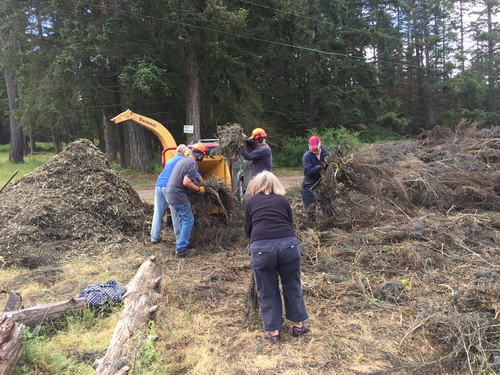 Regular meetings are held at the Gabriola Fire Hall #1, Training Room, 730 Church Street, Gabriola Island, B.C., every second and fourth Monday of each month, September through June, but not on Holiday Mondays, such as Thanksgiving, Victoria Day or during Christmas week.

To Request Funding Assistance, see How We Help. 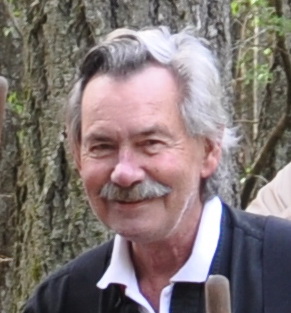 It is with great sadness we announce the sudden passing of Lion Bernard W. Wohlleben, November 17, 2019 . Bernard was actively involved with the Lions on Gabriola since 2006, and sponsored by Lion Eric Boulton. Bernard, always a jovial presence, helped with the repairs of Drumbeg Road, Concert on the Green, wood splitting, and many of our projects for the good of our Gabriola community. He will be missed. Our condolences to his family. 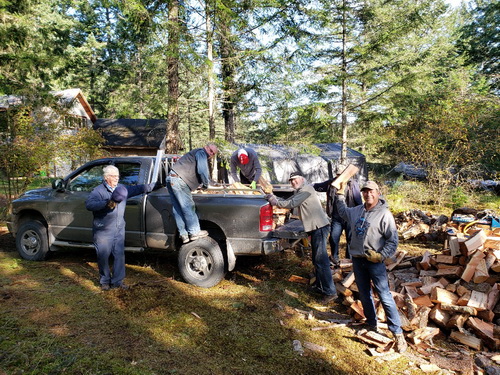 Lions load and deliver firewood to five families on Gabriola on 28 Sep 2019. 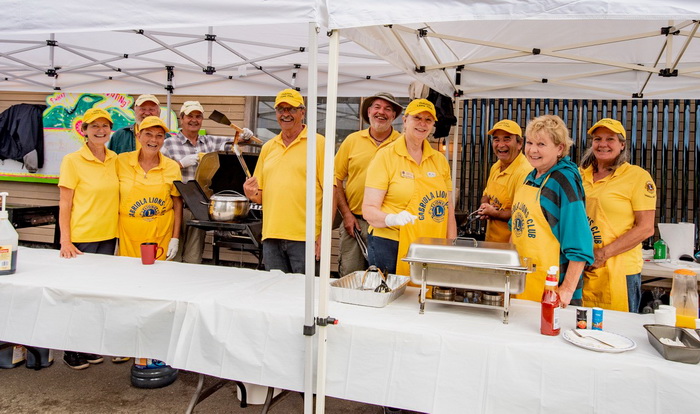 On Aug 30 & Sep 1 Lions got together at the Commons for a pancake breakfast fundraiser. The Culivate Music Theatre Art Festival was underway and several Lions worked to provide a great breakfast for visitors over two days. Here Lions Anne, Doug, Kathy, Dixon, Larry, Jon, Sharon, Paul, Miriam and Betsy are ready as the day-one breakfast crew. (Photo: DB) 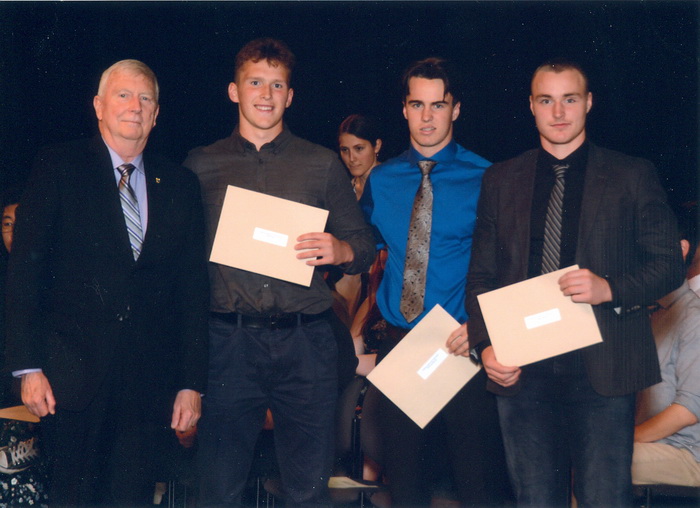 High School graduates Caleb Pounds, Maren Bradbrooke and Zephyr Melnyk each received a $2,000 scholarship from our club at an Honors Night at the Port Theatre in June. Lion Bill Kalbfleisch presented the awards on behalf of the club.

With sunny weather our walk headed out from Gabriola Sands Provincial Park with 35 plus walkers and furry friends. We were delighted to have Larry Smith join us with his Lions hearing assistance dog guide Vespa! Thanks to the generous Gabriola community, over $1,100 was raised! (Photo: Jude Briscoe)

Lions Foundation Dog Guides support Vision, Hearing, Seizure, Autism, Diabetic and other physical or medical disabilities. Although it costs $25,000 to train a Dog Guide, they are provided free to the recipients due to the fundraising and generous donors.

Online donations to this very worthwhile cause can be made HERE. 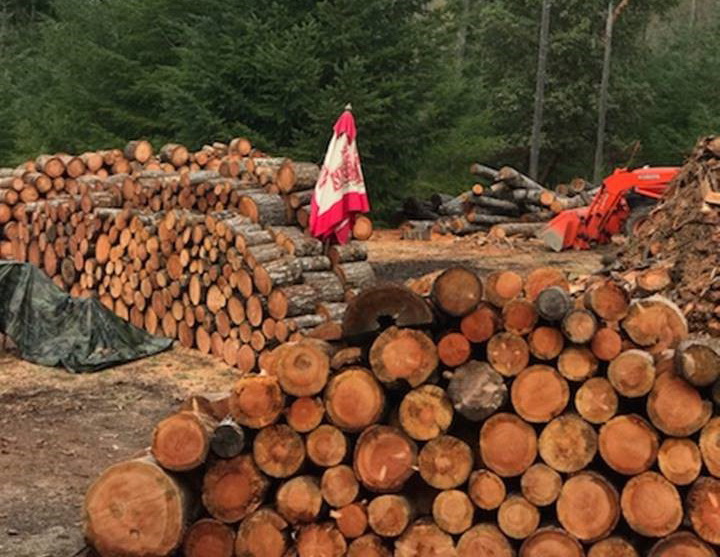 Shown here are some of the logs that have been bucked in preparation for the arrival of the Wood Splitting Lions on Saturday, 21 April, 2018 at Lion Mike's. This is an important work party as it helps season the wood for next winter's "Firewood for Those in Need" project. Thank you Ben, Curtis and Trevor of Gabriola's Island Tree Service for bucking the wood to get it ready for us to split. 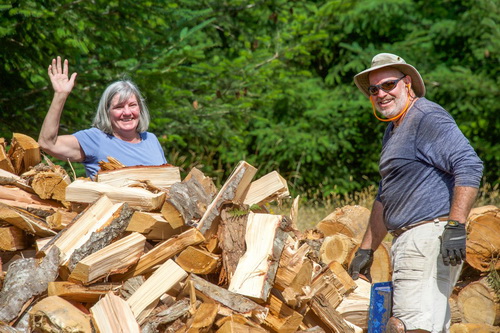 Lions and friends got together to split wood for our Firewood for the Needy program. Logs donated to the Lions had been bucked and stacked and numerous wood splitters were loaned to the club for the task. Many thanks to the friends of the Lions who came out to give us a hand. Here President Betsy and Lion Jon take care of business. (Photos: DB) 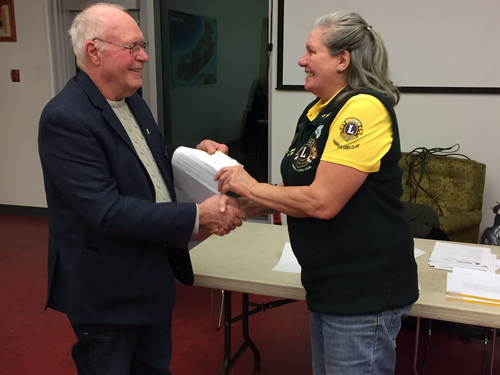 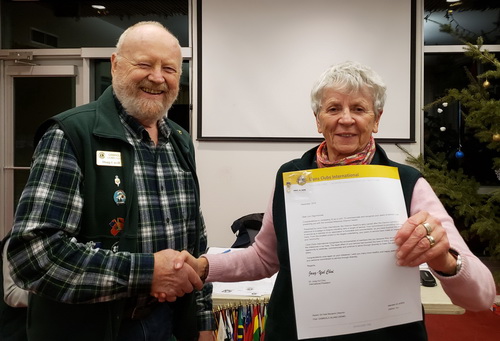 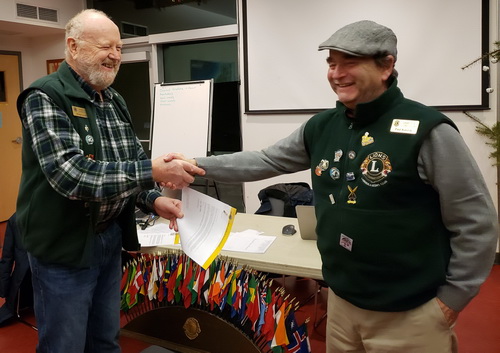 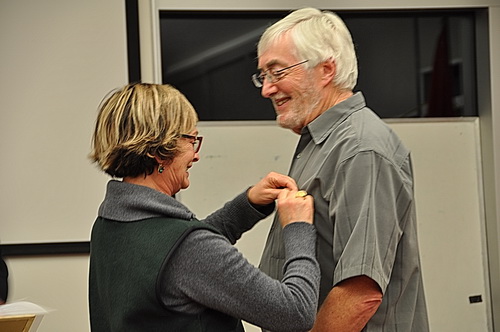 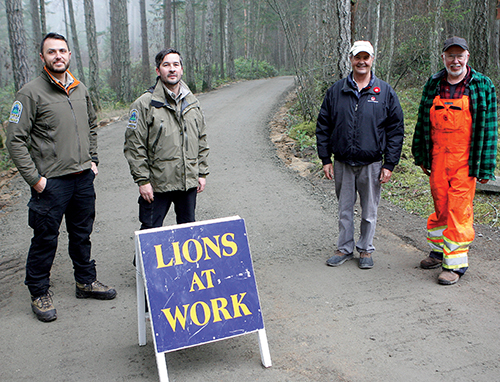 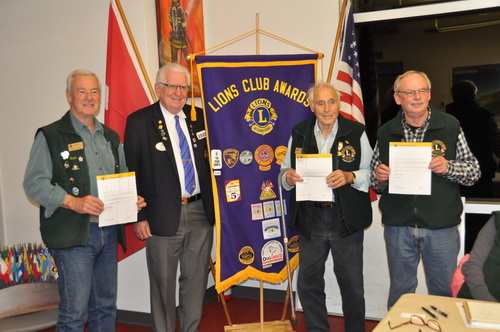 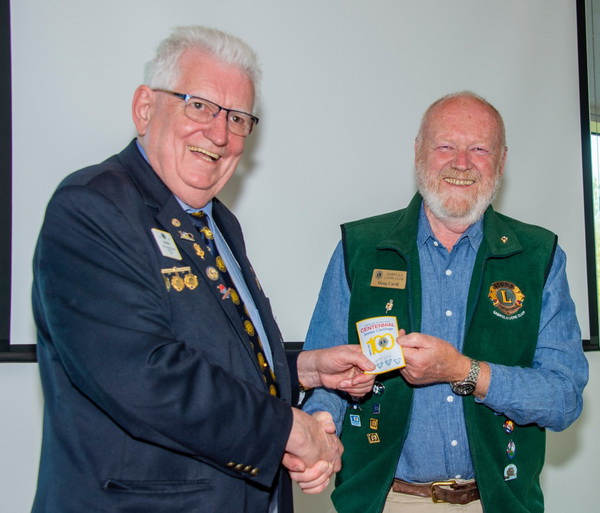 District Governor Elect Cec Specht visited to present our club with a Centennial Service Challenge Award for having completed Lions Centennial projects related to Youth, Environment, Vision and Relieving Hunger in our community. 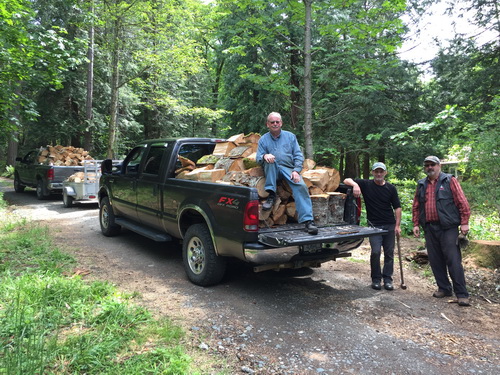 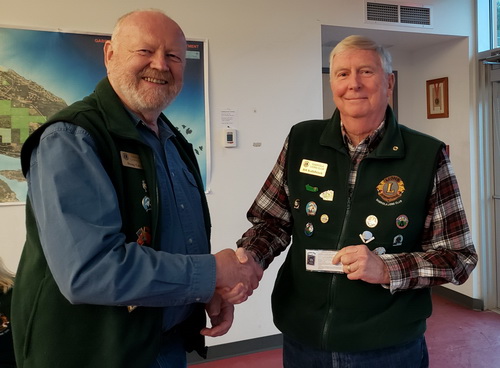 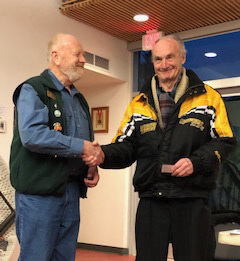 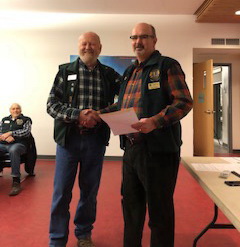